Only the other day I had pleaded for a political consensus on the number of times democracy could or should be murdered during a year or during the term of a legislature. Too frequent a killing of democracy does not bode well for its good health. More importantly after it has been murdered , the body should be interred, cremated, or otherwise disposed of with greatest dispatch . No matter how vibrant our democracy is , it does not make a beautiful corpse. Like lilies that fester it smells far worse than weeds .
Even the merest patzer hooked on to Agatha Christie or even Jasoosi Duniya could tell you that the recent murder was not planned well enough. It is easy to mock the wisdom of planners which saddles them with the responsibility of dragging the corpse all over the country, leaving tell-tale blood stains and marks of dragging. A murder should be executed swiftly , bloodlessly and the disposal of the corpus delicti must be done with clockwork precision. The sight of the dead body of democracy lends some credence to the rumours about its ill health, because it is only those who are in the great game of politics know that democracy is like the Schrodinger’s cat : it is both alive and dead. Or if you are the type who has literary inclinations, democracy is like the Cheshire cat, the cat has disappeared but the smile lingers on and on .
Democracy is all about deception. A rather crude description of it compares it to a balloon sent up in the air in a village fair, and while you were watching it your pockets are silently picked. I can tell you it is much more sophisticated than that . ‘Free elections’’, says the maverick thinker, commentator and polemicist Slavoj Zizek, “involve a minimal show of politeness when those in power pretend that they do not really hold the power, and ask us to decide freely if we want to grant it to them.” Could a Kafka maintain the illusion of an ordinary voter, in all his phony majesty ,seated on the make believe throne, playing king and granting ruling rights to all and sundry? The art and sorcery of politics lies in maintaining this illusion.
How does politics achieve it? The primary trompe de l'oeil is to make their constituents believe that politics is adversarial, that there are good people and evil people. The good should rule, the evil should go to jail. But it is not a fact. Politics of all shades of morality, from black to jet black , are connected through subterranean capillaries which feed each other . It has a palimpsest identity and masks of good and evil are revealed according to expediency . Whenever there is a regime change people impatiently await the evil predecessor whose corrupt practices stood exposed, about whom copious documents were flashed , will now certainly end up in jail . Have you ever seen any politician of consequence go to jail ? Bergson’s quip, “Stop !Only God has the right to kill his own kind ,” is merely an exercise in rhetoric .
Politics has over the years evolved a very complex code in which it conducts its intra mural transactions. That is how it keeps its followers engaged and constantly enraged because the concept of enemy is central to the political enterprise. They cohabit merrily while their followers are at each other’s throat. Umberto Eco let me in to their secret code , “the politician, when speaking in obscure terms, is actually sending a message in code that emanates from one power group and is destined for another. The two groups, sender and receiver, understand one another perfectly well, and the wittiest of rhetorical turns is not, for the right people, mere flatus vocis but so many promises, threats, refusals and agreements. It is clear, moreover, that in order for communication between power groups to carry on undisturbed it must go over the heads of the public, just like the coded message passing between two armed camps in a war situation, which might be intercepted by chance by a radio ham but never understood. The fact of its not being understood by others is the indispensable condition for the maintenance of private relationships between power groups…. ( I)t leapfrogs the citizen and denies him any room to agree or disagree.” The art of politics is about making suckers of people. The best, the most illustrious conmen of them go down in history as great leaders .
Arthur Miller’s observation that our political life, thanks to 24/7 TV is now “profoundly governed by the modes of theatre, from tragedy to vaudeville to farce”, is now obvious to all . The political actors are past masters at feigning conviction and the television is an accessory to their deception. Instead confronting politics ,collectively, to account for the mess in detail, the TV manages to stage a fixed political reality show and we are reduced to being mere voyeurs of the antics of the fake fighters in political arena.It is a spectacle of the “strange symbiotic relationship between power and resistance.”
I am afraid it is a long convoluted way of getting to the point, but TV is the greatest ally of debauched politics.Together they make suckers of people .
Posted by Manoje Nath at 12:53 PM No comments: 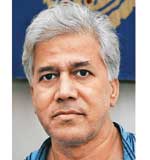 HAS THE COUNTRY FAILED THE IAS ?

Why Writing A Memoir/Autobiography Is Not A Good Idea