The death  of SSR and the Quest For TRP

Neal Postman said long back, in his book Amusing Ourselves To Death , ‘television is …… most dangerous when its aspirations are high,'. One may add that when it proclaims nobility of motive, it is absolute disaster. TV set out to secure justice for SSR, a very noble aim no doubt. But that justice seems nowhere on the horizon and with every passing day, like images in a hall of mirror, it is receding further away.

The malign, if unintended, consequence of its crusade has left the memory of the man disfigured , a legion of his admirers dismayed ,the lives of those around him, whom he may have loved ,at one time or the other, in tatters , the hitherto unknown details of his private life, his financial dealing , the bitter factitious quarrels of his loved ones at Patna and those at Mumbai are now the subject matter of salacious gossip, prurient scrutiny and idle speculation. A full retrospective on his life, is being played out, 24/7, not as an act of homage to the departed soul , but as successive fixes of ‘pudiya’ for the voyeuristic clientele.The general presumption is that the investigative agencies buckled under prime time pillory, under the plebiscitarian pressure to do something , anything to keep the lynch mob, primed up for revenge by the braying media beast, peaceful and pacified.
Whether SSR was bi polar or not is still being investigated but India itself has been split into a world of bi polar opinion . Even while the official investigation is on rival channels are holding a referendum on whether Rhea is at fault . Half-truths, facts torn out of context to fit particular narratives , half truths that further reinforce partisan beliefs, are driving viewers deeper into fanatically shared opinions. People seem to be living in different worlds of facts and judgments and no dialogue seems to be possible.
Meanwhile Chinese soldiers are breathing fire down our borders, and in their viral avatar as Covid 19 they are raging inland , the economy is tanking , distress and discontent are rising like a tide threatening to engulf the social order but we are busy marshalling arguments and support behind another war being fought on the side lines, between Ms Kangna Ranawat and Ms Rhea Chakraborty. Could George Louis Borges have scripted it better ?
Posted by Manoje Nath at 11:39 PM No comments: 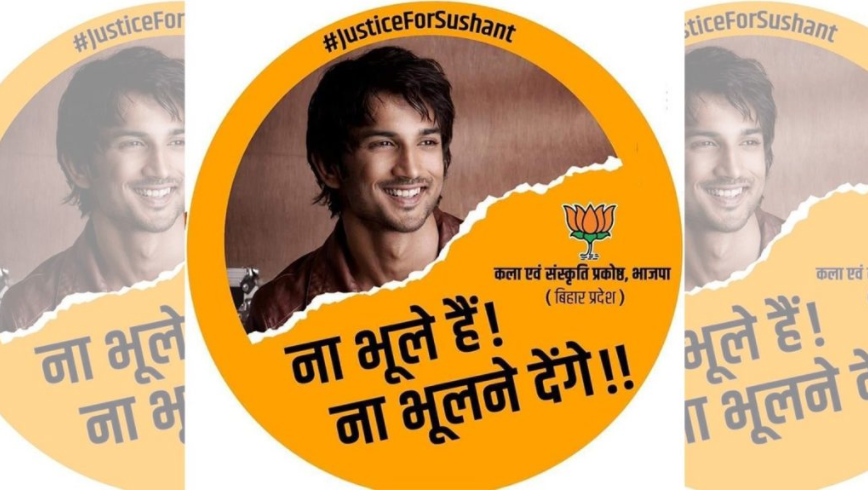 The cultural cell of the BJP has taken out a poster of a winsome  Sushant Singh Rajput, “Na Bhoole Hain Na Bhoolne Denge”( Neither we have forgotten , nor will we let  others forget)His death, bemoaned as a huge loss is, in fact, a huge gain for the party, both in Bihar and in Maharashtra. While in Bihar the issue is expected to help them exploit Bihari sentiment, in Maharashtra it may rock the boat of its bete noir, the Shiv Sena, a bit.

From the day a political agitation for investigating SSR’s death originated  in Bihar, one could foresee that Sushant  will be  forced to be a revenant guest,  to  help  the NDA come back to power in the forthcoming assembly  elections in Bihar. Therefore, it is only natural that the twice useful ghost of SSR should be granted, what Jacque Derrida  says , “the right. .to... a hospitable memory...out of a concern for justice.”

What is a ghost?’ Stephen Dedalus asks in Ulysses, and promptly answers his own question. ‘One who has faded into impalpability through death, through absence, through change of manners.’ Not a figure who is entirely unreal, just one who has become a little faint, lacking in physical immediacy.     SSR was not quite as demonstrative about  his Bihari roots, as in the manner of say,  Shatrughan Sinha. He  was certainly not the most recognizable  Bihari   when alive.        But thanks to the never ending campaign(engineered?) of a section of the mainstream media  and  many groups on social network platforms  SSR  has  come to be viewed as the quintessential Bihari genius, cut short in the prime of his career by metropolitan jealousy or the machinations of a deeply entrenched mole acting on behalf of some shadowy mafia.

The assembly elections in Bihar are  a few weeks away.     When it comes to voting ,  appeal to  the reason of the voters in Bihar  is  pointless.  Illusion is  the key, drama is  the essential  requirement ,  catchy  identarian phrases, startling images, uncompromising and simple, that should occupy his entire  mental space and nullify  the capacity of the mind to think.  The “art of impressing the imagination of crowds is to know at the same time the art of governing them, ”   and governing elites have read  Le Bon with care and with great profit.

For fifteen years,“social justice,” a fetish under which all sorts of political fantasies and personal ambitions of the supreme RJD leader  were lumped together, but never made explicit, stoked and  sustained  the subaltern enthusiasm . It  helped create some sort  of a generic loyalty of a military kind to the supreme  leader,  ready for the moment when direct action could be taken. Primed by occasional war cries like  Bhura Bal Saf Karo(Eliminate Bhumihars,Rajputs,Brahmans, Lalas,(Kayasths ) ). But the illusion wore off when it was realized that under the garb of ‘social justice’ there marched the more dogged  political morality  of power as a means to self-aggrandizement  and  dynastic ambition. A competitive offer needed to be put in place to outwit the earlier charmer and the deeply alienated  forward caste, still a force to be reckoned with was ready to be charmed , beguiled, enchanted .

The successor  NDA government  promised to inaugurate the millennium which  would take care of present miseries  and future problems . It dedicated itself to the task with gusto and Bihar  seemed  to be well on course  to a glorious future but in the absence of a credible opposition and a fawning  media  it gradually  lost steam.  The illusion was  however sustained by means of  emotional stimuli of Bihari pride , and tremendous media  out reach. Together with the accompanying spectre of a return to the nightmare and undifferentiated chaos of the Jungle Raj kept the people interested in the  idea of  Sushahsan.

The  images of  of the migrant workers,  “the invisible” Biharis , who contribute heavily to the domestic economy by their remittances, undertaking  impossibly long journeys  back home on foot shocked the global imagination. Many of these stragglers were reduced to being  mendicants on  charity of strangers  and it  blew  away even the fig leaf form the already  frayed  vestment of Bihari pride.

In this stark setting  the most visible achievements of the government , monuments , museums , mediation centers,  forced the realization that Bihar was so heavily invested in the “past” that our present concerns , woefully inadequate  medical centres and no prospect of getting absorbed in gainful activities at home  seemed to have been neglected . In an atmosphere like this the illusion of  Sushasan  as a  march to  ever more promising future  would  have been  difficult to sustain. “Justice for  SSR”  appears to  have just the right proportion of   sentimentality, generalized grievance and unfocussed resentment  to  anesthetize  the questioning mind.

Whatever the final outcome of the case the pot can at   be  kept boiling till the elections.  After the elections getting rid of a ghost which has served its purpose, would be that much easier, because ghosts leave behind  no  dead bodies, no evidence , set in motion  no official  enquiry . The Biharis would be depended upon to disperse to the four corners of the country in search of jobs, education, health care after having performed their most sacred civic duty.

Posted by Manoje Nath at 1:50 PM No comments: